Featured Snippet Update January 2020: Everything You Need to Know 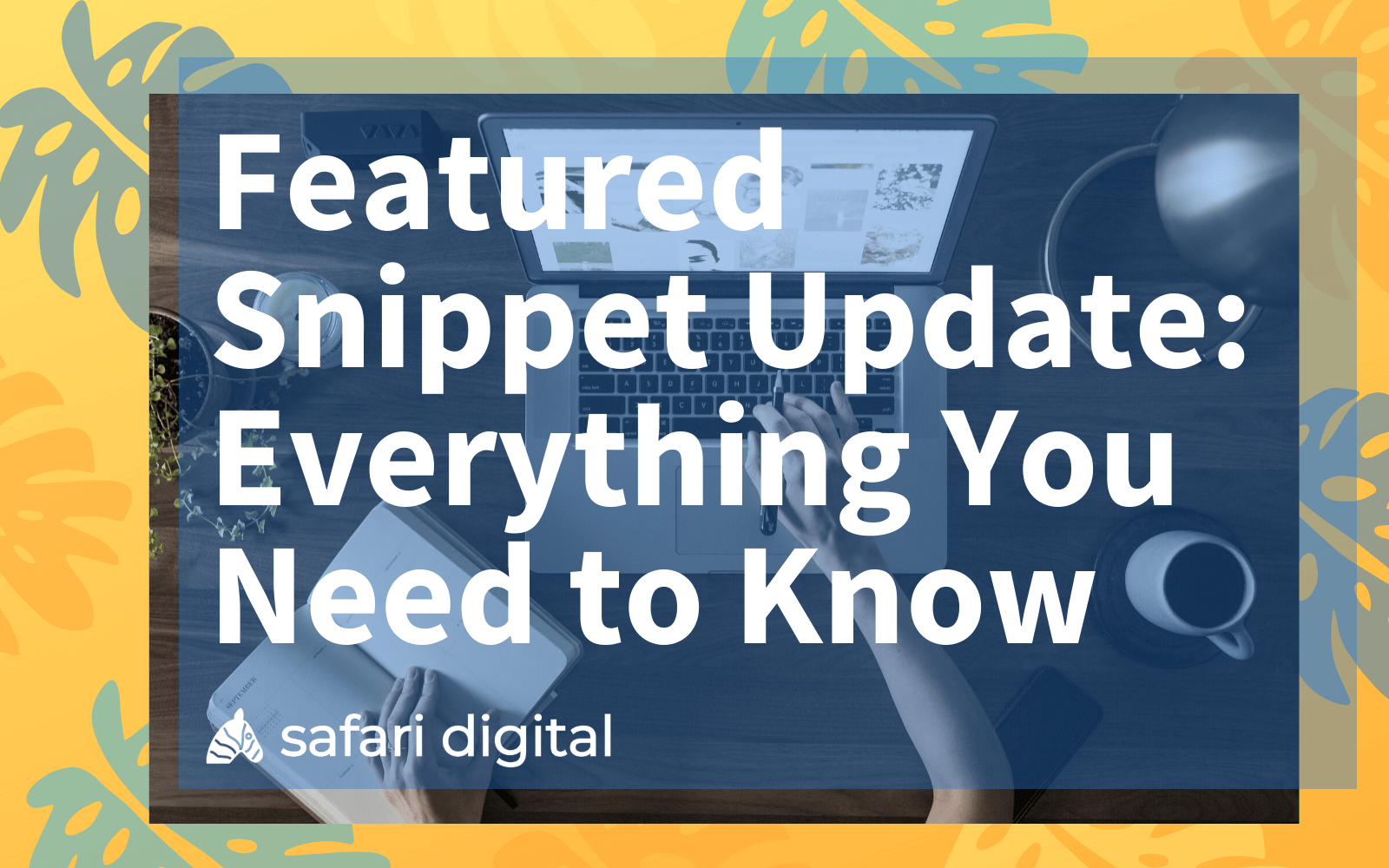 Google’s featured snippet update for January 2020 is live – here’s everything that you need to know.

As of January 22nd, 2020, webpages in a featured snippet position will no longer be repeated in regular page 1 organic search results.

On Twitter, Google’s Danny Sullivan made the announcement: “If a web page listing is elevated into the featured snippet position, we no longer repeat the listing in the search results. This declutters the results & helps users locate relevant information more easily. Featured snippets count as one of ten first page listings we show.” 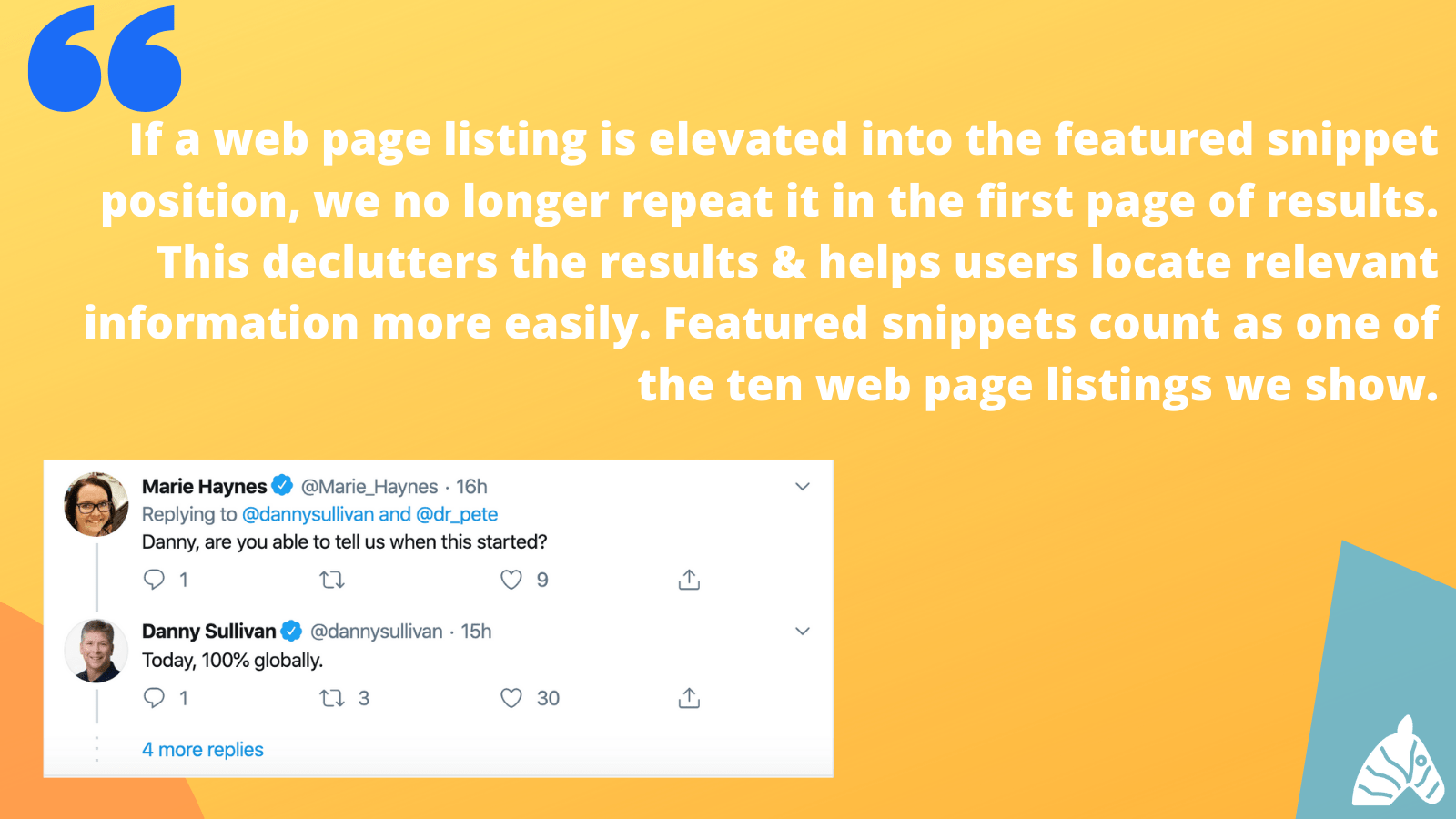 The update has created quite a stir within the SEO community, as featured snippets have been referred to as position zero previously – the ultimate way to snag clicks away from the top results of a SERP while maintaining a page 1 result. However, the new update indicates that if your website is featured, it will technically class as position 1, and your original listing will no longer be on the first page of results. Google has named the proves of removing duplicated URLs from SERPs containing featured snippets “deduplication.”

According to Peter Meyers of Moz, webpages in featured snippet positions have had their regular organic results moved back to the top of page 2. However, Danny Sullivan later tweeted that appearing on page 2, let alone at the top of, is not guaranteed if your page also features in a snippet. No guarantee of a ranking on page 2 has many SEOs and marketers alike wondering if earning featured snippets are worth it and will be as coveted following this update.

What Are Featured Snippets?

In case you’re not yet familiar, featured snippets are pieces of information extracted from targeted pages. When Google wants to answer a question directly, they will attempt to find the correct answer in the index. This question and answer scenario create a particular class of organic search results in which Google chooses a page to represent the correct answer in a small drop-down box at the top of the SERPs. 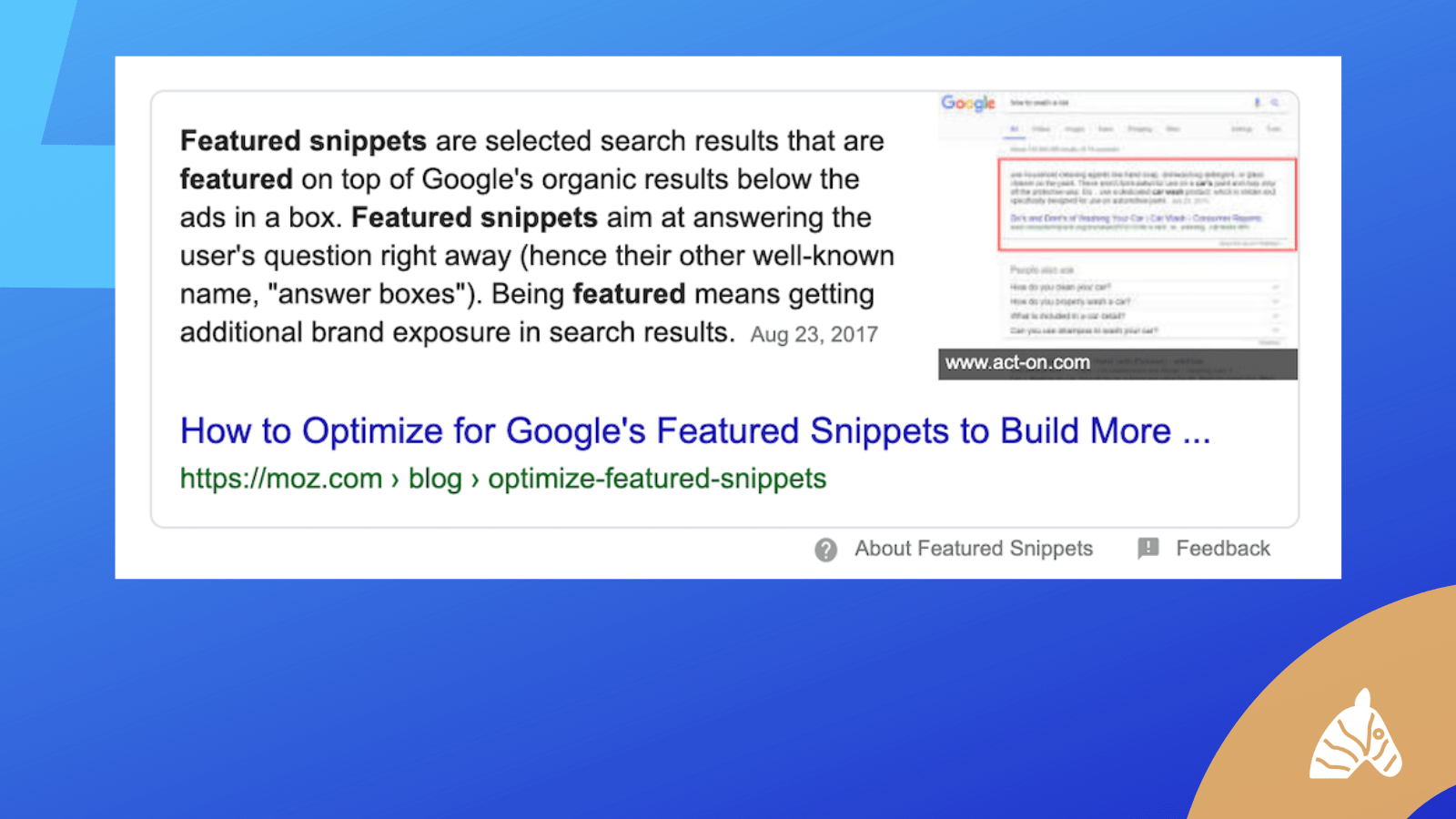 Before Google’s most recent featured snippet update, it was not uncommon to see websites in a featured snippet position appear twice on page 1 of search results. Featured snippets presented an unprecedented opportunity for sites to gain double the exposure and visibility on page 1.

Featured snippets are showcased differently from the rest of the search results. They occupy more real estate, are eye-catching, and provide a quick answer to the user’s search query. So, in theory, they should be attracting more clicks.

While this study took place over two years ago, it is still the most relevant available data provided at scale. Danny Sullivan replied directly to a tweet concerning CTR and featured snippets with: “Featured snippets drive a lot of traffic. That’s why people often optimize for them. They also often tend to elevate pages that were further down the page to top position. But bottom line, there are options not to be featured, if people don’t want.”

Essentially, Google believes this new feature is not a “punishment” for webmasters, but rather a chance for Google to declutter top SERPS and re-evaluate duplicated URLs on page 1. For those who want more control of their content for featured snippets or who believe their website is being negatively impacted by being featured in snippets: You can block content from being extracted in the featured snippet settings, using the nosnippet tag. 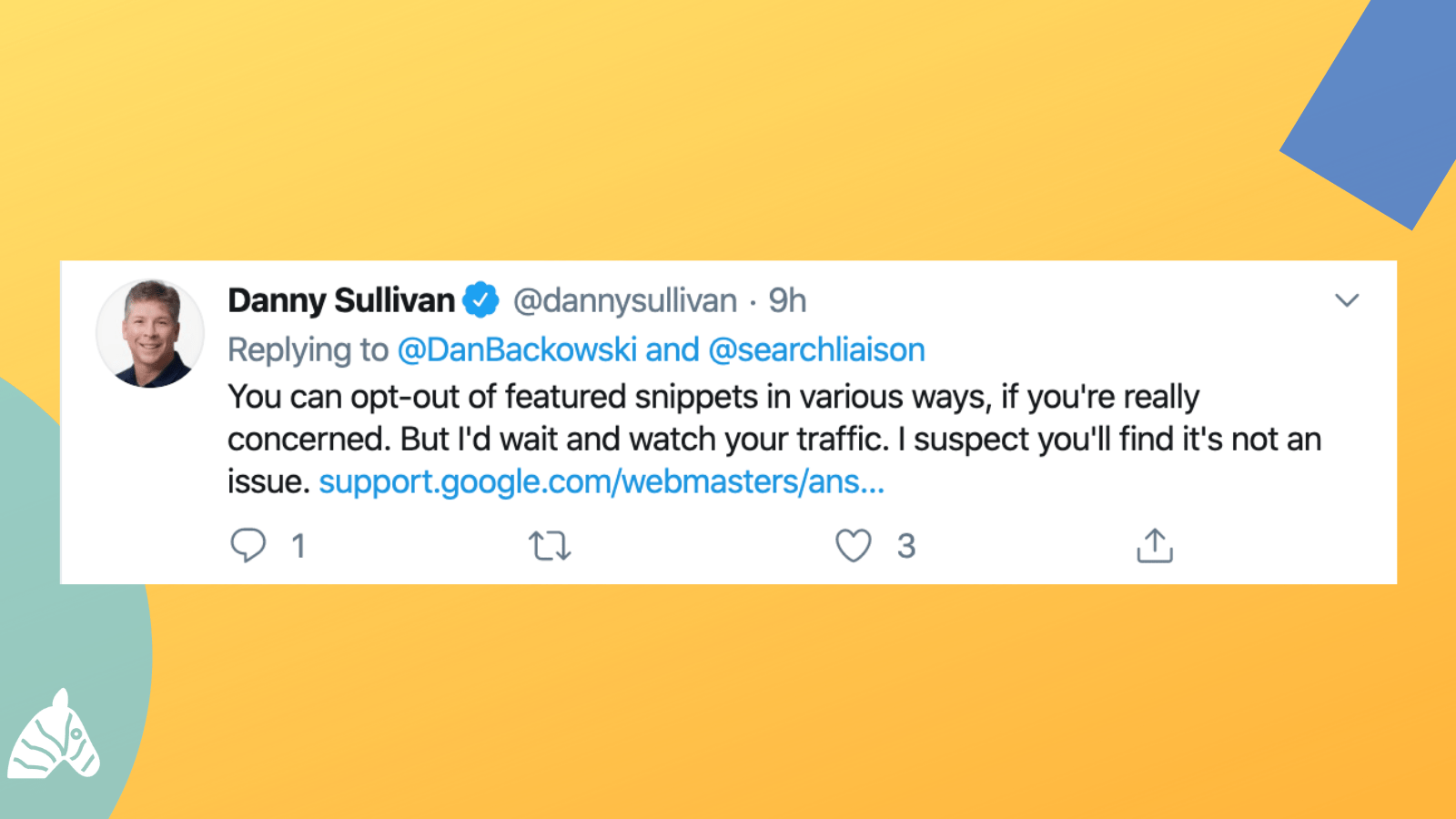 What Happens If You Lose A Featured Snippets?

Does your page return to being listed as an organic search engine result, below the new featured snippet?

There is yet to be a definitive answer on this one, as it is still very early days. Danny Sullivan did, however, reply to a tweet regarding these situations with “I would expect so. To be a featured snippet, you had to rank in top results. Then we elevated. And now we deduplicate. If you don’t get featured, deduplication ends.”

So, while that describes what should be happening in theory, SEOs need to keep an eye on their results. If you lose your position in a featured snippet, take note of where your first search result takes place. 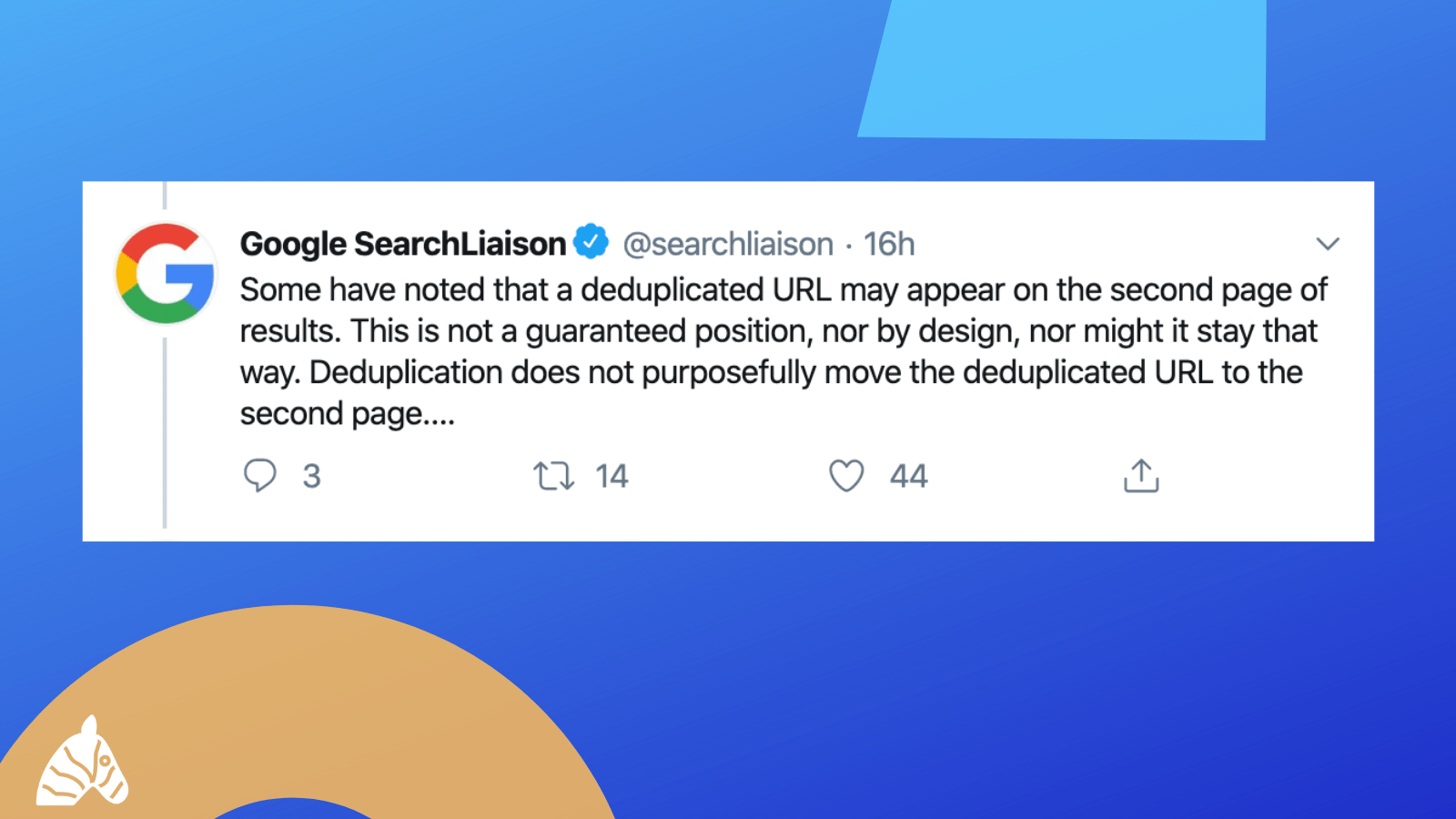 The Google Search Liaison twitter also tweeted that if you have two pages that rank on page 1 for a query, one can appear in featured snippets while the other can appear in the other nine blue links.

Google will only push the featured snippet URL to page one, not every URL on the domain. So, while Google may push your first result from a featured snippet back, any other pages from your website ranking for the same query will not be affected.

You Can’t Have Your Cake and Eat It Too. 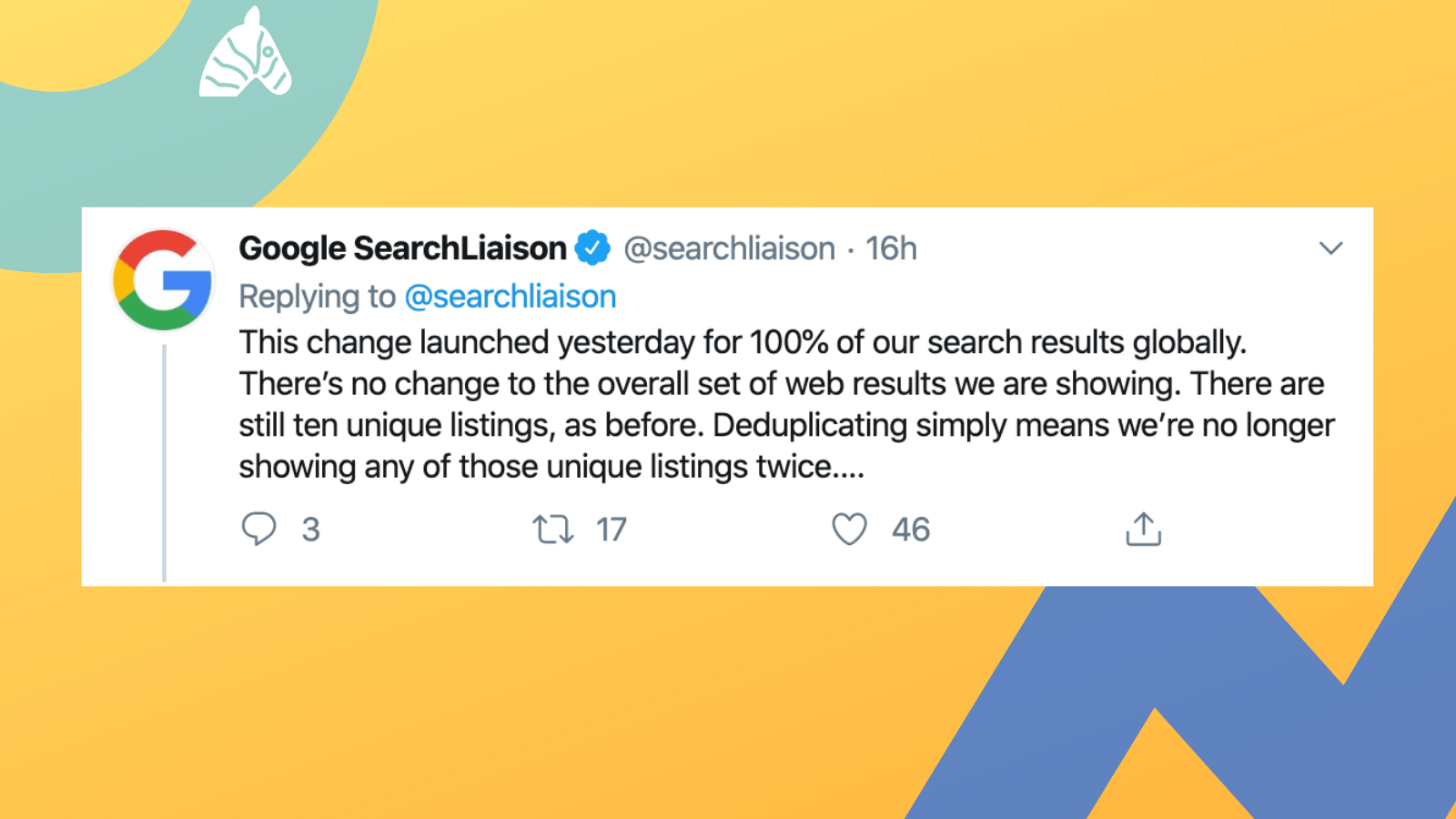 Our conclusion is that this new update will bring both negatives and positives, depending on the intent of the search query. Google created featured snippets to answer questions on a myriad of subjects. For some queries, winning the featured snippet may come with higher CTR; for others, losing additional organic listings on the first page may mean featured snippets are not worth the trouble.

While we understand the need to declutter and improve the efficiency of search engine result pages, this change may be frustrating for those who have worked two sustain a featured snippet and a page one result.

On the one hand, this new update may be frustrating for the listing, which lost the additional search result and featured snippet. But on the other hand, we do believe this should be viewed as a progressive move by Google overall; now there is one more available spot for other sites to rank on page 1. Google is aiming to give the best experience under evolving search habits.

At this point, we’re not sure it’s all good news or bad news. This new update is unknown territory. We are in dire need of exclusive and fresh data to confirm the impact of these new changes. The best thing we can do right now is to monitor traffic to those specific pages that are claiming featured snippets and watch how they perform with time.