Featured Snippet or Position 1 – Which is Best for SEO?

Featured Snippet or Position 1 – Which is Best for SEO? 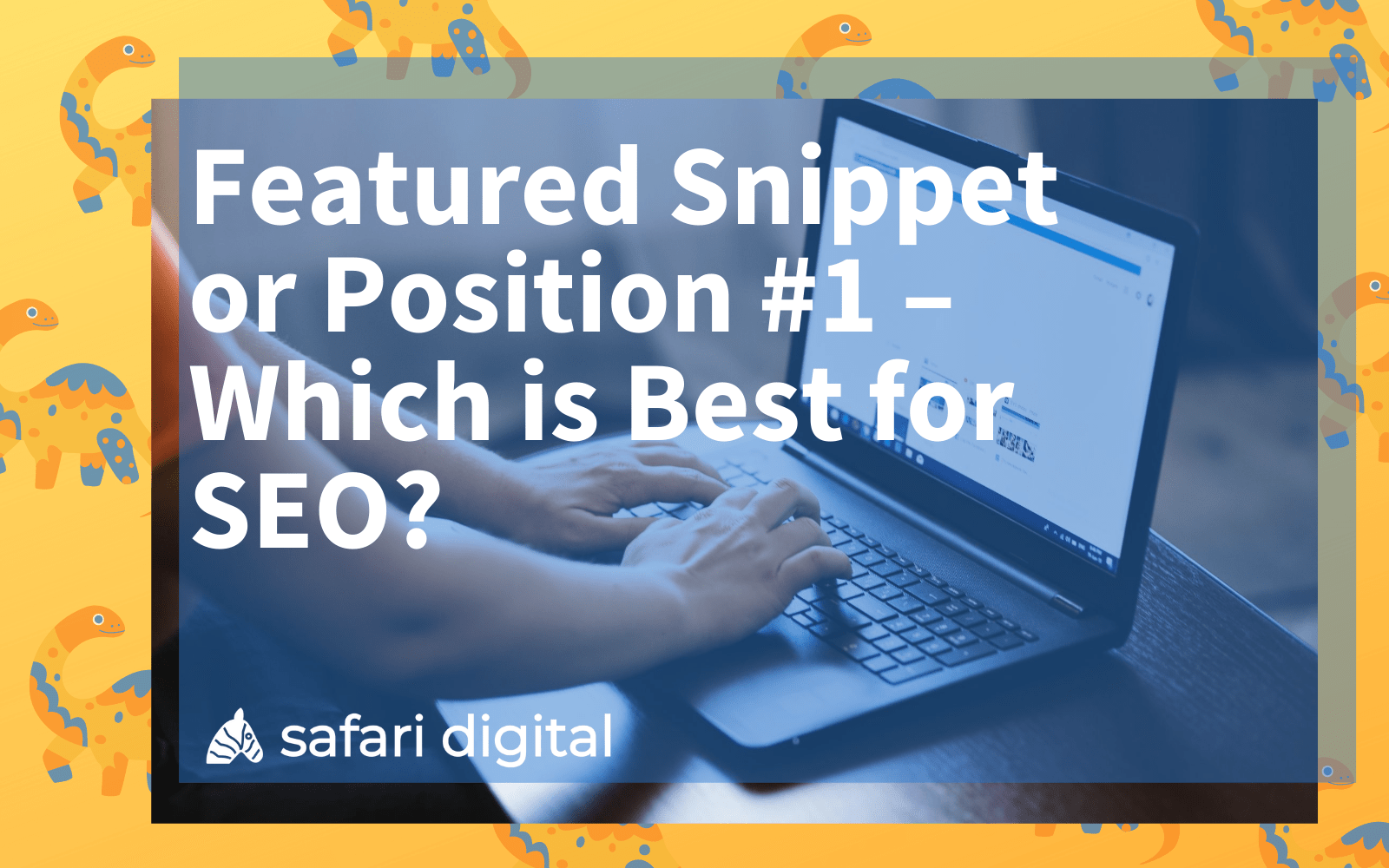 For years, featured snippets have been the most sought-after spot in search results and have garnered a reputation for offering more clicks, traffic and attention than any other position in Google. Having your content featured in a snippet means that you had the opportunity to present twice on page one of your key term – once in the featured snippet, and once in your regular organic listing. As marketers, we coined this term “double-dipping”.

However, everything changed in January when Google announced that they would deduplicate and only show the featured snippet URL once on page one of search results. The shift in algorithm caused many marketers to speculate: Are featured snippets actually worth it anymore? Were they ever?

Like it or not, featured snippets are here to stay. According to Moz, approximately 14-15% of Google’s searches now present with a featured snippet, and that number is only going to increase. The idea of featured snippets is purely to enhance the user experience and provide direct and concise answers to a question or query searched on Google. So, what does this mean for us, as SEOs?

Today, featured snippets are somewhat of a double-edged sword. While it’s nice to have your site feature as the top result on Google search results, the feature itself is a great user experience and many users will not go any further once they have prompt answers. Various studies have been conducted to reveal that the featured snippet often performs worse than the search result displaying below, because of the amount of information featured by Google in the snippet. 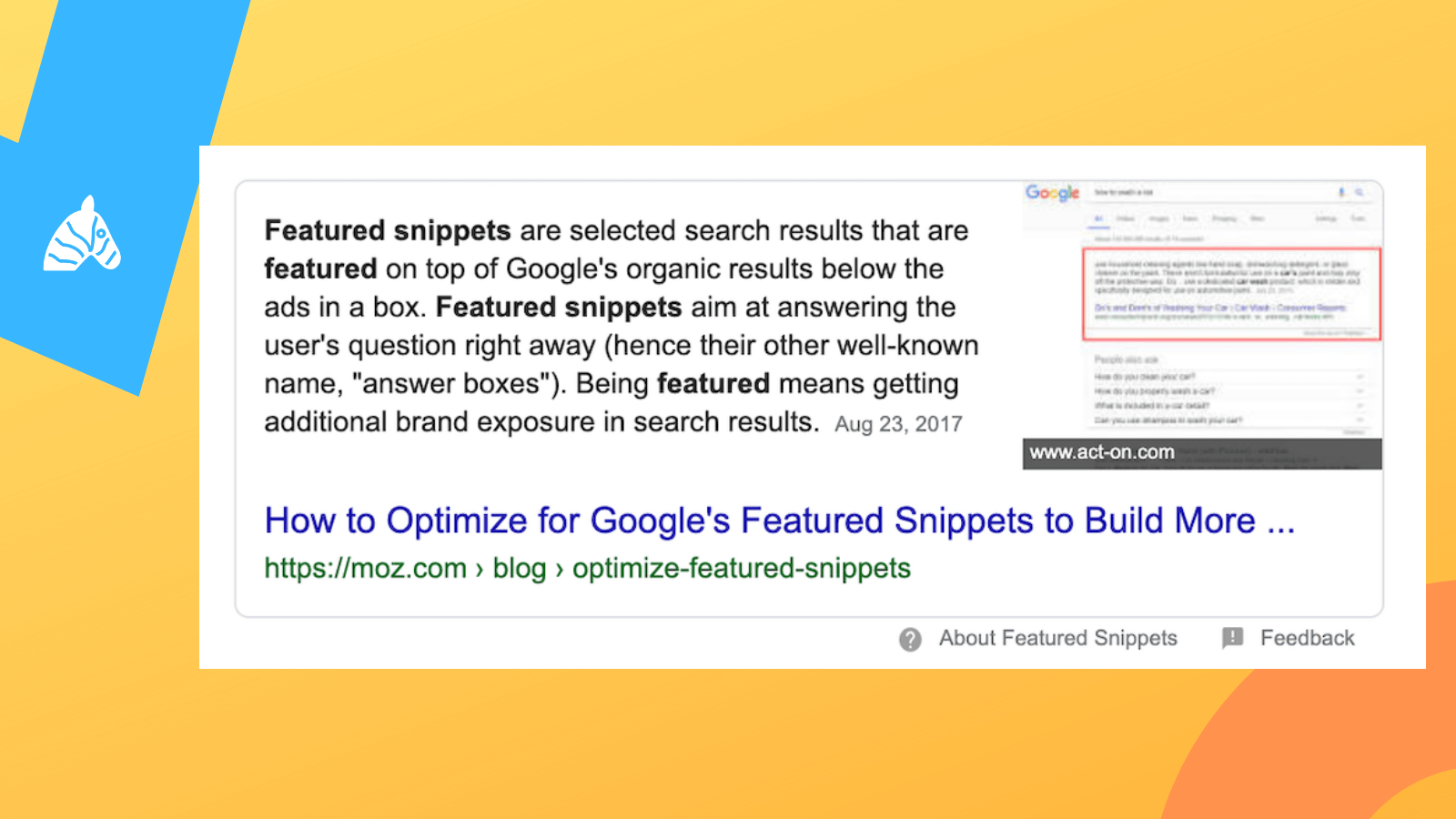 On the contrary, there have also been a couple of studies that have proven the opposite. Earlier this year, the search engine experts at Moz conducted A/B tests on some of their content that was already featuring in snippets within search results. The results were astounding, to say the least. Using Google’s data-nosnippet tag, Moz applied the tag to some of their top-performing pages that were featured in search results. Immediately, they found that instead of gaining traffic by opting-out of featured snippets, their pages actually experienced a 12% drop in traffic, ranking below the featured snippet.

Following the deduplication, many were quick to jump onto the knowledge that websites can implement a nosnippet tag to their content to opt-out of featured snippets. We’re still unconvinced and unsure on whether or not optimising/de-optimising for featured snippets is better for SEO.

In January of this year, Google released an update that directly affected featured snippets and websites that were previously featuring in search results. Calling it “deduplication”, this meant that featured snippets no longer provided a site with double exposure on the first page of Google.

Google now sorts search engine results so that featured snippet URLs appear only once on the first page results. Before this update, pages that were being featured in snippets in search results were also displaying as one of the top results in search results. Marketers and SEOs have long sought after the opportunity to double dip; however, this is no longer possible at all. 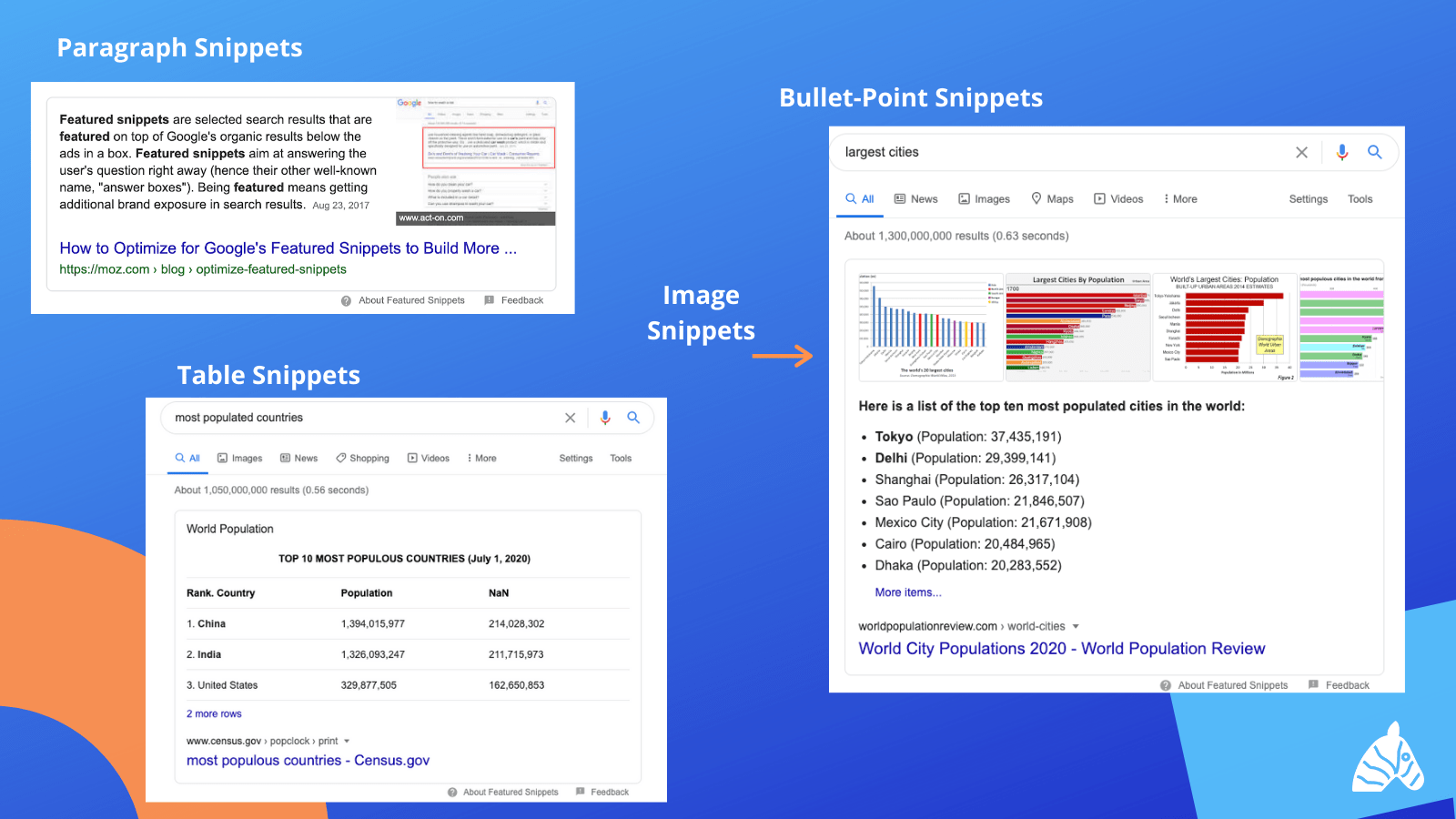 Other Recent Developments in Featured Snippets

In June of 2020, Google announced that they would be making another change to featured snippets. This new update will mean that for some featured snippets, clicking on the URL will take the user directly to the text that is relevant to their search query. The relevant answer will be highlighted and will only apply to results where Google can confidently determine exactly where the text is.

The natural language algorithm update referred to as BERT was rolled out for both organise search rankings and featured snippets in 70 languages in December of 2019. BERT works to help Google to better understand the complex nuances of language, which impacts the way featured snippet content displays for various search queries and questions.

The Types of Featured Snippets in Search Results 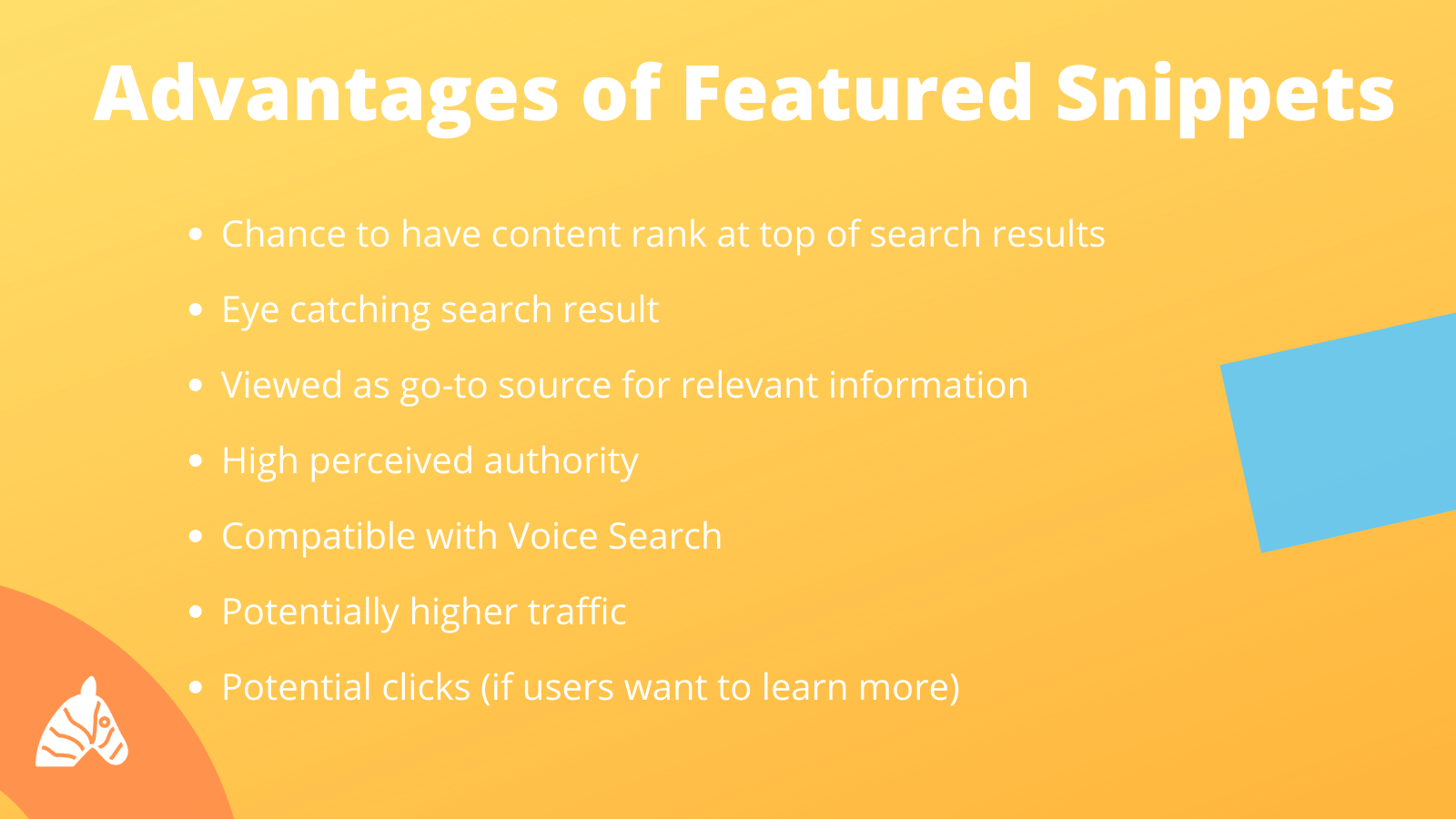 A common misconception within Search and surrounding featured snippets is that people consider featured snippets to be the top result and receive the most clicks. However, while getting your site to feature in snippets will establish your content as authoritative, that’s about as fruitful as it will get for some.

As discussed in the study conducted by Ahrefs, often featured snippets do not receive many clicks as we once thought they did. This lower click-through rate is due to the fact that featured snippets are designed to answer the user’s query without the user having to click-through to read any more information. Users have their questions answered quickly and concisely and usually leave the search results without going any further. Other users may purely be put off clicking onto a featured snippet as they may not distinguish the snippet from the Google Ads. Either way, featured snippets are designed to answer a query or question – if there is no reason for a user to continue on their quest for an answer, they will not click through to any search results.

Are Users Clicking on Featured Snippets?

To be honest, it really depends. We’re still trying to figure out whether or not featured snippets, or the coveted #1 ranking position are better for SEO. The Ahrefs study cited was conducted more than three years ago, well before all of these dramatic changes were applied to featured snippets.

On the one hand, as featured snippets continue to provide more relevant, useful information, users may be enticed to click the snippet link to learn more from the webpage. On the other hand, if the featured snippet provides an exhaustive answer to a user’s query, they will not take their search journey any further, not clicking on any websites.

Even when users are inclined to click on the link to get more information, they may have more than one option to choose from. Carousel buttons or image links can potentially draw users away from the actual website offering the featured snippet content. Let’s also not forget that many featured snippets aren’t even benefitting from top-of-the-page visibility. Many featured snippets are presenting in positions 2-7, depending on the search query.

The one component of data that we DO have (so far) is the cited study conducted by Moz. The marketing giants did not benefit from opting out of featured snippets. In fact, they suffered a significant traffic loss when they implemented the nosnippet tag. While the results were surprising, it’s difficult to use that data to make informed decisions about every website vying for a featured snippet. 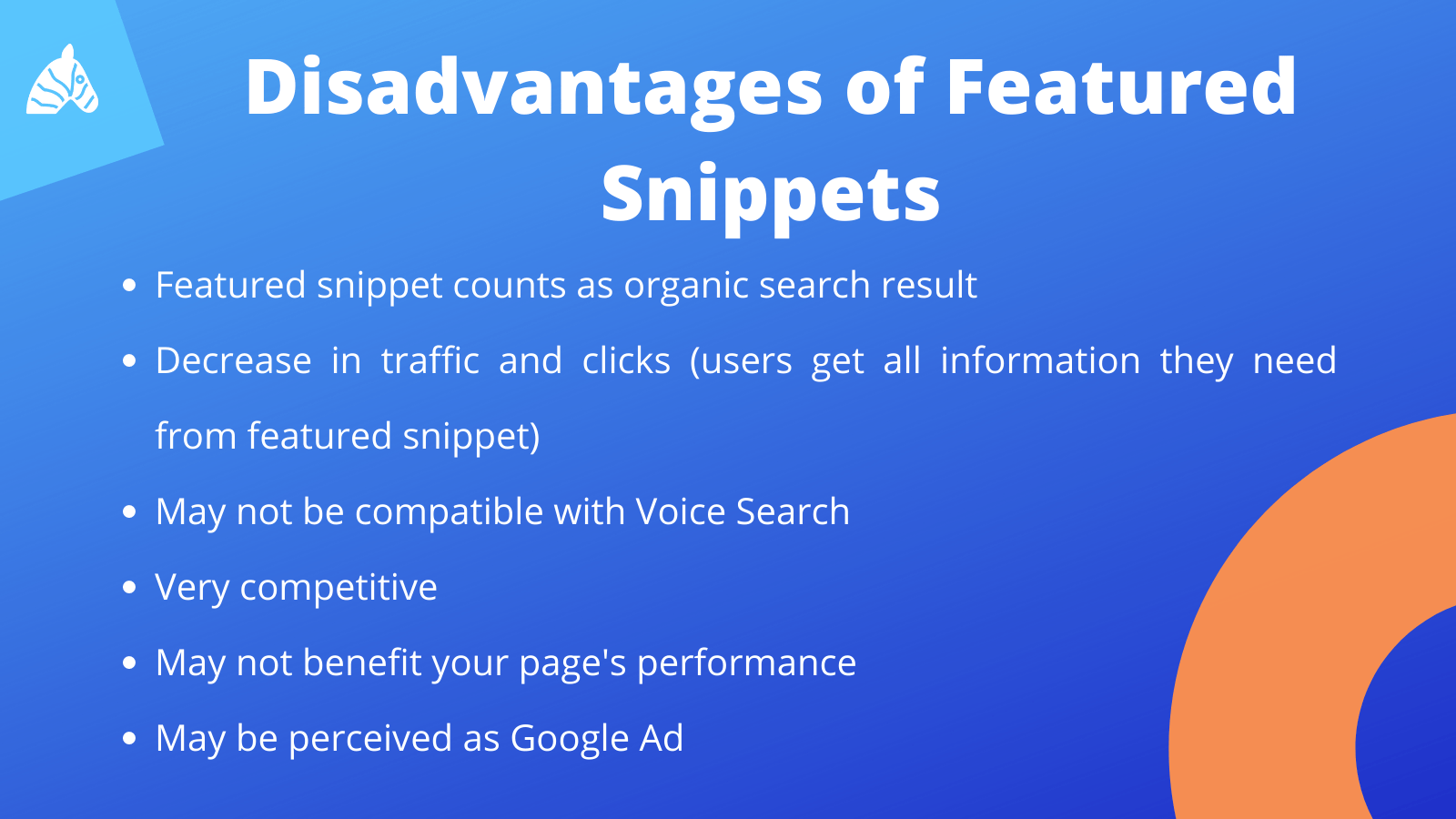 Getting More Clicks on Your Featured Snippet

What we can say for sure, is that there are ways to make the most of your featured snippet. The biggest factor preventing sites from receiving clicks in featured snippets is the content that is being cited within the snippet. Here are some tips to getting more clicks on your already featured snippet:

• Answer the question but also offering an opportunity for additional information that will spark the searcher’s interest and encourage them to click through.
• Numbered and bullet-point list snippets should include content with over eight points. In this case, a “more items” link will appear at the bottom, prompting users to click through to your page.
• Table featured snippets can also provide an opportunity to get an “X more rows” link below the snippet. If your table snippet does not already have this link, consider adding more rows to your data.
• Ensure that you have a relevant picture to go with the text that is Google is pulling for a featured snippet. Place the image directly under the paragraph, list or table that is being featured in search results to avoid a competitor’s or an irrelevant picture being used.
• Use the correct alt tag and appropriate Schema Markup to make the crawling process even easier for Google’s bots.

For some queries, winning the featured snippet may come with a higher CTR; for others, pages in the search engine results not being featured may experience higher amounts of traffic. Whether or not your website will benefit from featured snippets is entirely dynamic and dependent on what users want from each search query.

Our advice? If you’re ranking number six, seven, eight or below on Google’s page one, being featured in the snippet for your key terms could do your site wonders. Go for it. However, be sure to target the right featured snippets and create content that captures clicks. This means using the above tips to optimise snippets for clicks.

If you’re already ranking number one, two or three on-page Google, going for the featured snippet may not be worth the trouble; there’s every chance you will yield the same amount, if not more, of traffic in your current position. 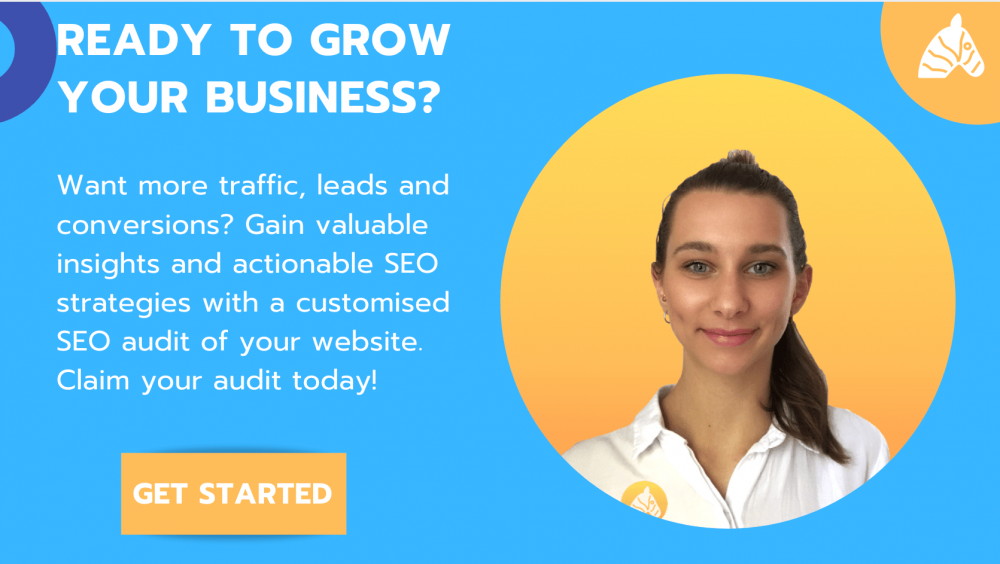