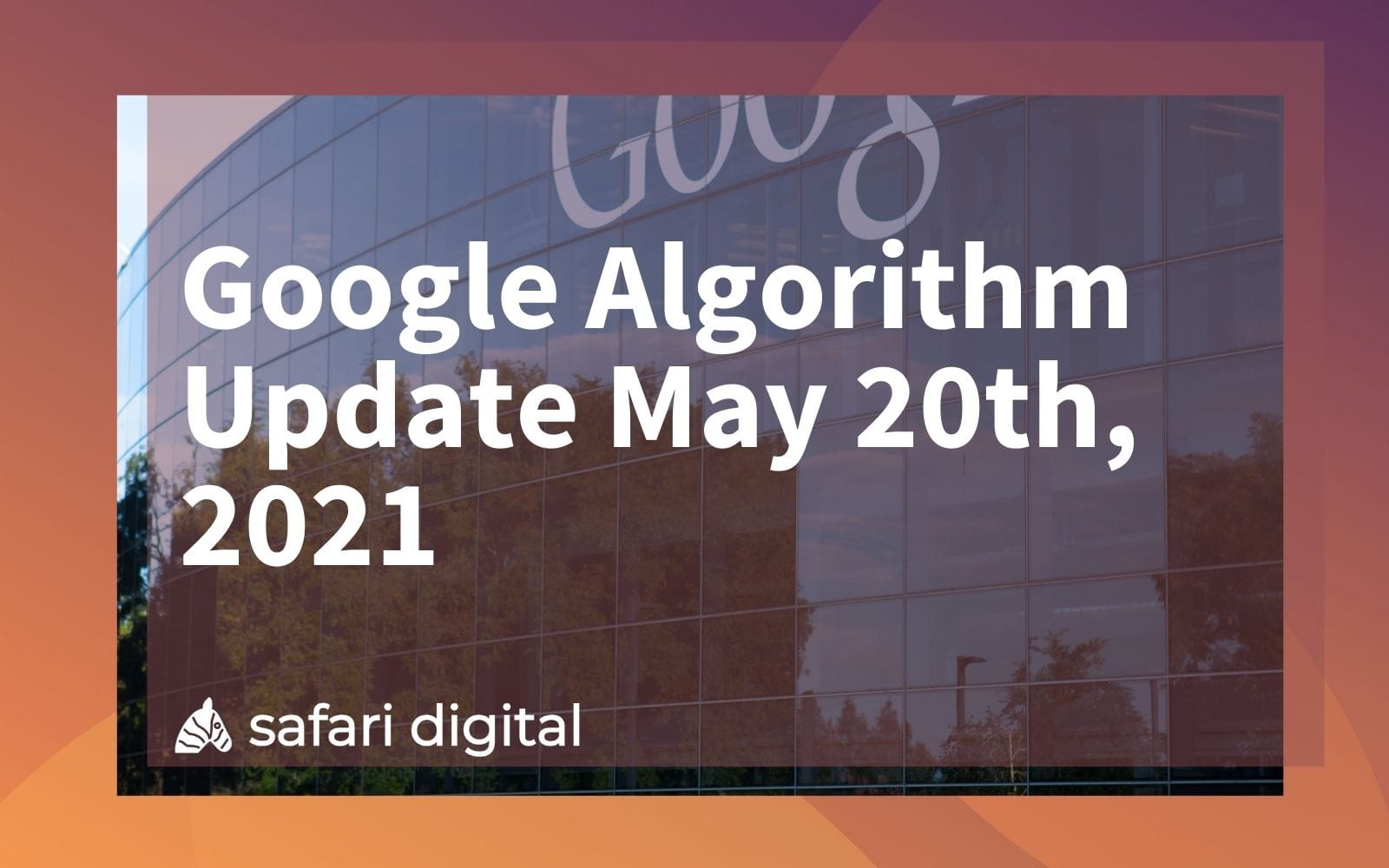 There has been an unconfirmed Google search ranking algorithm over the 19th and 20th of May, 2021.

If you’ve noticed volatility in the search engine results over the last few days, you’re not alone. As reported by Search Engine Roundtable, there seems to have been an (unconfirmed) Google search ranking algorithm update occurring this week.

While it is still yet to be confirmed by the search engine giant, the chatter among the SEO community, combined with noticeable volatility in the data, has us once again pondering whether or not we’re in the midst of an update.

The discussion around a potential change in the algorithm started on the evening of May 19th, with the SEO community taking to the Webmaster World Forum and Twitter to report their traffic losses. Some website owners report dramatic traffic losses over the two-day period, while others seem to have been unaffected.

For us, we’ve seen a number of client websites and our own become vulnerable to the update – with little or no conclusive evidence to what may be causing the traffic changes. May has already seen a vast number of minor updates hit the search engine results. While most have been unconfirmed by Google, we’re left wondering if these updates have anything to do with the upcoming page experience update in June 2021.

What Do the Tools Say?

One of the best ways to better understand and grasp the impacts of a Google Search Algorithm update is by checking the third-party tools most commonly used by the SEO community.

SEMrush, one of the most popular tools used for organic traffic visibility and website traffic, shows the apparent impacts of the Google Search Algorithm Update. From their notes, the SEMrush Sensor shows high activity for the Au Mobile database and increased activity for the AU desktop database.

On Thursday, May 20th, all categories received a rating of 6.6, which is in the high range for traffic volatility. SEMrush notes that “Position changes for numerous sites! Google results are shaking up. This may be a sign of a possible algorithm change. “ 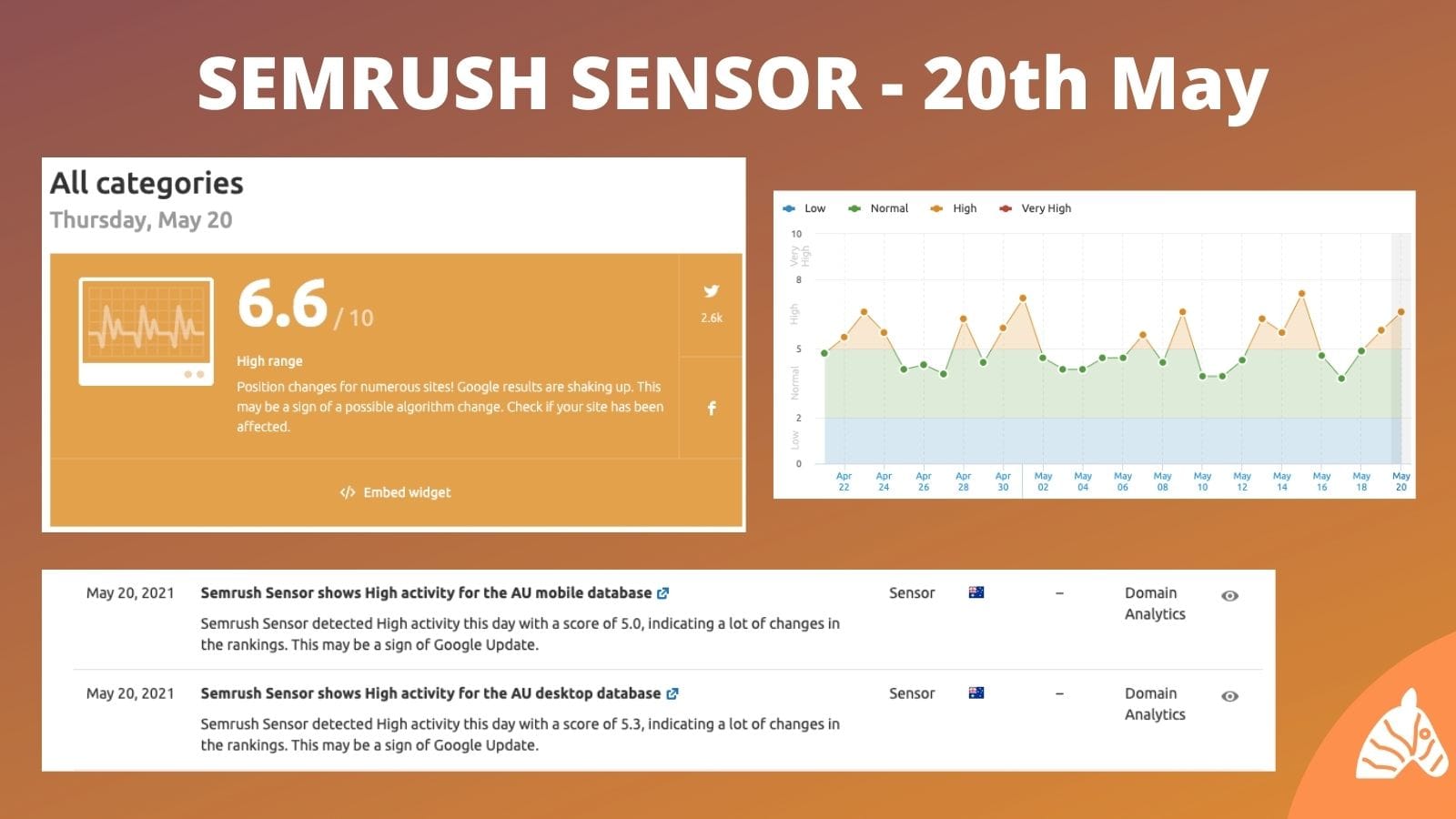 How Is the SEO Community Reacting?

One of the first indications of an algorithm update is chatter among the SEO community. Website owners have taken to SEO forums and Twitter to discuss the impacts of the suspected search algorithm ranking update of May 19th and May 20th.

What Has Google Said?

However, for a minor update, that’s relatively normal. Google have stated that they make thousands of updates to the search ranking algorithm every year, and they generally do not confirm updates unless they are major.

Google’s spokesperson may or may not confirm the update, pending what happens over the next couple of days.

What Can I Do If My Site Has Been Impacted by the Google May 19th/20th Update?

Hold tight and see where the ball lands. The best advice that we can provide is to give it a couple of days, wait and see how things peter out. The worst thing you can do over the next few days is to make drastic changes. Let the update do its thing, and once we have seen the full effects, you can work with a specialist or SEO Agency to decide what to do next.

Once the update has settled, the volatility of the impacts should follow suit. There may be some trends of the update that you’ll be able to observe and use to your advantage – however, give it time.

If you’ve been impacted by this update and are stuck on moving forward, refer to pages affected and compare them to pages that have not been hit. This comparison should give you a better understanding of why these changes may have happened and provide guidance on what you can do to mitigate any negative impacts.