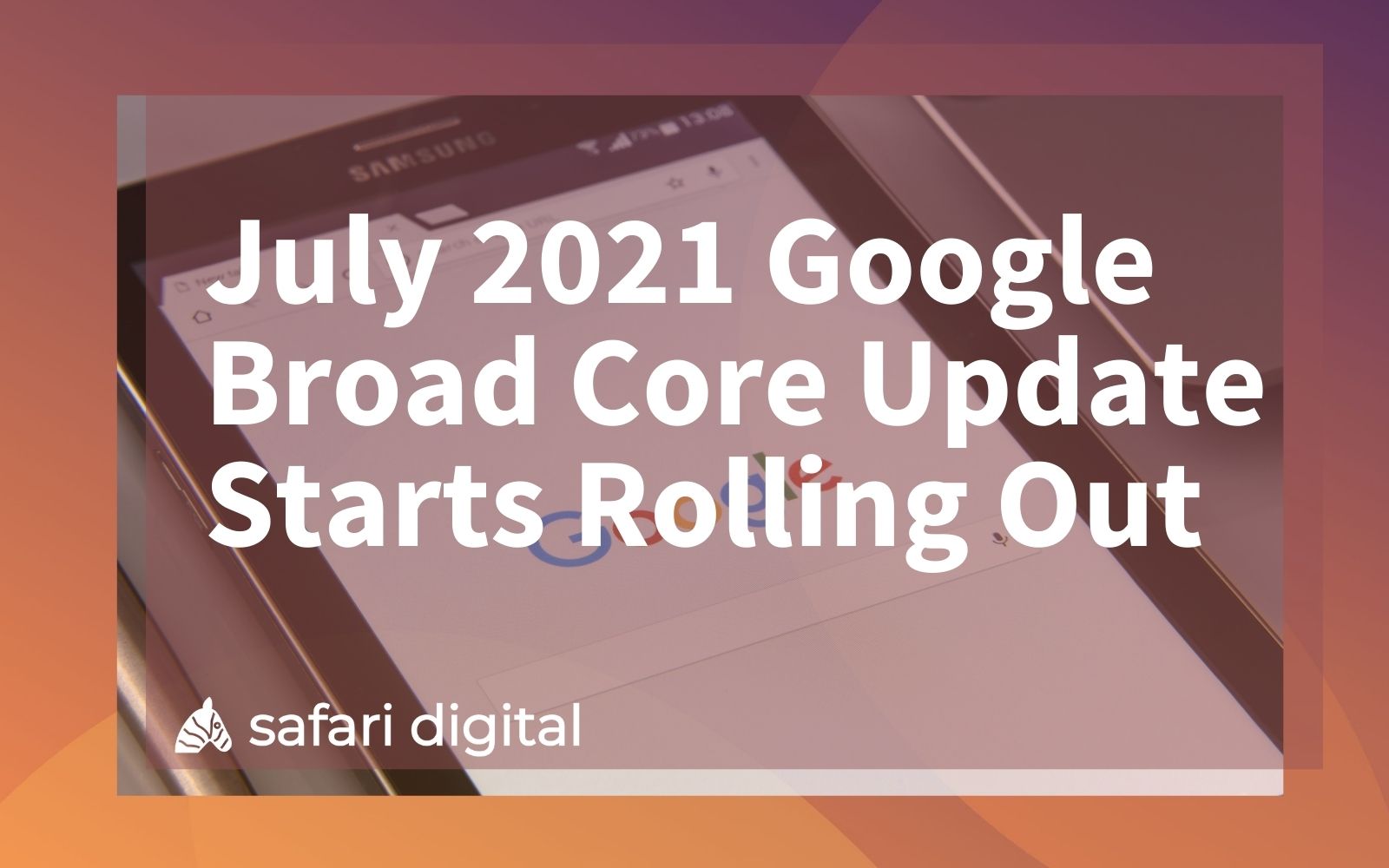 The July 2021 Google Broad Core Update started rolling out on the 1st of July 2021. The early signs show large movements across a wide range of industries. From what we can see so far, a lot of websites that were negatively impacted by the June 2021 core update are now seeing an improvement. Conversely, a portion of websites that saw huge shifts in the June 2021 core update seem to have returned to normal.

Remember last month, when Google began to roll out the page experience and June update during (roughly) the same period? While the Google Page Experience Update was successfully implemented, there were some time concerns with the broad core update, which was to follow shortly after.

This July broad core update is set to be a continuation of last month’s core update, which rolled out on June 3rd. The Search Engine Giant did, in fact, intend for this portion of the update to continue last month but seemingly ran out of time.

Subsequently, this update was planned and came as no surprise. While we spoke briefly about the Google Core Update part 2 late last month, the challenging part comes in the form of understanding how this may affect your website and what you can do while experiencing the (potential) volatility of search engine results.

Part One of the Mid-Year Google Core Update

Back on June 2nd, 2021, Google announced the following:

“Later today, we are releasing a broad core update, as we do several times per year. It is called the June 2021 Core Update. This will be followed by the July 2021 Core update.”

By June 3rd, we received further notice from Google:

“Some of our planned improvements for the June 2021 update aren’t quite ready, so we’re moving ahead with the parts that are, then we will follow with the rest with the July 2021 update. Most sites won’t notice either of these updates, as is typical with any core updates….”

The June update saw varied impacts – while plenty of websites across the board experienced traffic loss, many website owners and SEOs took comfort in the fact that the July 2021 update was coming to correct many of the volatile changes.

While we expected this update to come rolling in early July, there was no indication that July 1st would be the starting date. And here we are.

What’s launched yesterday (and today) are presumably, the remaining updates that Google intended to have within the June update. For those that were impacted negatively back in June by the broad core update, this may mean a chance to recover. However, there have been so many updates over the last two months that it could be extremely difficult to diagnose which update has caused a decline in traffic. For many, sites may have been impacted by a combination of both the Page Experience Update, the Broad Core Update and the other many smaller updates that were rolled out over the last eight weeks.

A Busy Period for Google

Several major changes in the search results over the last 30-days have made traffic and rankings more volatile extremely volatile.

What Does This Mean for My Site?

A Google Broad Core Update could mean any number of things. Generally speaking, the core updates are released to provide a number of changes to the search algorithm in an effort to improve the way that content is crawled and ranked. For the July broad core update, in particular, SEOs and other industry professionals are predicting that the changes made will correct and mitigate the impacts of part one in June.

A core update targets a wide range of factors, generally relating to content and how the algorithm perceives and ranks content. Google has said that most websites should not notice the impacts of these core updates – however, if you’ve spent any time tracking and following Google’s Broad Core updates over the years, you probably know personally that this is not always the case.

One thing that you can count on for sure when experiencing the impacts of a Google Core Update is that it will generally take 1-2 weeks to fully roll out. So, if by day one, you’re worried about your rankings, wait it out before you do anything drastic.

What to Do If You Are Impacted?

As we mentioned above, this update will take 1-2 weeks to fully roll out. As such, we strongly recommend you wait the full two weeks until you make any dramatic changes to your website.

If your website’s rankings have been hit drastically, there are a few things you can do in the meantime in an attempt to understand how and why:

• Identify whether specific pages are being impacted or whether you’re experiencing a sitewide drop. If the change in rankings is impacting a couple of pages, we would suggest reviewing the content on those pages and comparing it to your other pages or competitors to better understand what the difference may be.
• Review your page experience metrics. The page experience update was also implemented just four weeks ago and may be the reason that your web pages are performing poorly.
• Take a look at your Google Search Console for any notifications from Google that may relate to the organic visibility of your site.
• Is your content in line with Google’s E-A-T? If your content lacks on the E-A-T scale, this is something that a Google Core Update would attempt to smooth out.
• Talk to an SEO agency. If three weeks from now, you’re still struggling to understand what has happened to your website and why talk to a team of experts who can analyse the impacts and determine where your potential pitfalls and improvements lie.