Google Algorithm Update June 2021 – What We Know So Far 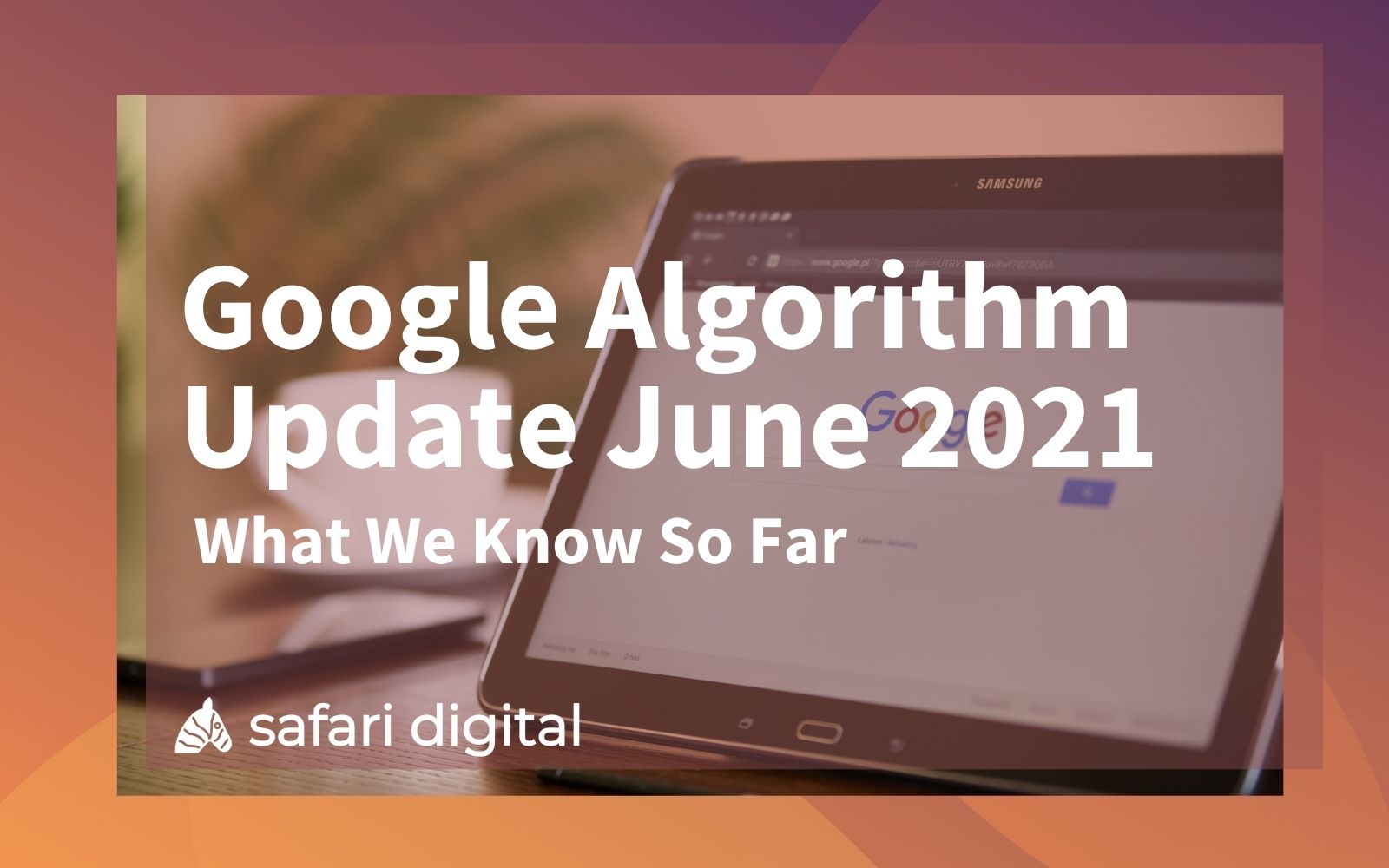 Google began rolling out a new core update to their algorithm on June 2nd, titled the June 2021 Core Update.

The June 2021 core update will be a global rollout over the space of two weeks and impact all languages on the web. It is expected that the rollout will be complete mid-June. Google’s search liaison Danny Sullivan has announced that we should also expect a July 2021 core update. The updates were previously delayed from the scheduled date of May 4th.

Historically, Google has released a core google algorithm update every couple of months or so, with the last update coming six months ago in December of 2020. Prior to that, the last update was in May 2020 with several smaller (albeit notable) ones following in January and May 2021.

So why are Google rolling two updates in quick succession now? Well, Google originally intended to pack all their updates into one complete core update but couldn’t get everything ready in time. As such, Google have decided to go ahead with the parts that are ready now and push the rest out in the July 2021 core update. More specifics with respect to the exact date are yet to be announced.

What Google Has to Say About the June 2021 Core Update

Google’s Danny Sullivan has stated that “most sites won’t notice either of these updates, as is typical with any core updates”. Previously, Google has expressed the reasoning behind their rollout of core updates, citing that “they’re designed to ensure that overall, we’re delivering on our mission to present relevant and authoritative content to searchers”.

Moreover, in this unique situation of two successive rollouts.

Google has asserted that “it’s possible a very small slice of content might see changes in June that reverse in July”.

What Should I Expect from The June Core Update and Beyond?

As with any Google algorithm update, your page rankings may go up, down or remain the same. Despite what Google says, there is a likely possibility that SEO professionals who manage a lot of sites will see plenty of changes within Google search results.

In saying that, if for whatever reason you are negatively impacted by the Google algorithm update in June 2021, keep in mind these effects may reverse with the July 2021 core update.

Keep in mind, core updates are designed to filter out low-effort, low-quality content from high-ranking positions and reward SEO professionals that prioritise producing valuable, informative content. If a core update causes your page to lose rankings, Google are essentially saying that they’ve found other pages they believe to be more relevant based on the updates that are intended to improve their algorithm.

Note that these changes can naturally happen over time. For example, an article about a July 2019 press release will not be relevant in 2021 and as such will fall down the rankings.

What Should I Do if I’m Negatively Affected by the Google Algorithm Update June 2021?

Google has previously provided guidance on how to recover from a broad core algorithm update, and this guidance remains relevant to impending and future core updates. To improve organic visibility, webmasters should:

• Focus on delivering valuable, relevant content.
• Produce content that covers the topic in-depth compared to competing articles.
• Ensure correct spelling, grammar, and overall readability.
• Address the specific topic explicitly to meet user expectations.
• Ensure that page titles and headings are not over optimized or misleading. They should reflect exactly what users click on the website for.
• Compile a strong backlink profile through the production of quality content.
• Remember that Google is a business. Google wish to reward SEO professionals who convey high relevancy in their content – relevancy that keeps users coming back to Google.

If you’ve been negatively impacted by the Google Algorithm Update of June 2021, you may need to re-evaluate your content and strategies to ensure that a positive user experience is being supplied. Google’s core updates to algorithm have, in the past, improved the overarching quality of sites. If the latest core update has impacted you, it could be time to self-analyse and adjust where possible.

If you believe that your content is valuable and relevant, the negative effects may reverse in the July 2021 core update, so make sure that you’re following the latest updates from Google and the overall public response to the changes.

Why Does Google Release Core Updates?

Google releases core updates as “delivering great results at this type of scale and complexity requires many different systems, and we’re always looking for ways to improve these systems so we can display the most useful results possible”

Google believes that “continued updates are key to ensuring they are supporting a wide range of publishers, creators and businesses, while providing searchers with the best information available” as “new sites emerge and the web changes.

In saying that, Google is constantly pushing out amendments to their algorithms. In any given week, Google may “implement dozens of updates that are meant to improve search results in incremental ways”. However, the company does not always share the details of these updates – only with core updates like this do they announce details.

The easiest way to safeguard your web rankings and limit the negative effects from minor and core updates to the Google algorithm is to ensure the delivery of consistent, valuable content.

If you’ve already been doing this, you’ll probably find that you experience a boost in rankings from core updates!

Where Do I Go From Here?

A core update is not necessarily cause for panic. You never know, it may actually boost your rankings!

Moreover, Google can see how their users react to the latest update and make amendments accordingly where needed. This is even more likely this time around with the impending July 2021 core update.

Our best advice is to sit tight and see how your pages respond to the update. In the event of a negative reaction, evaluate your content in contrast to competing articles and see where you can make improvements. You may be able to iron out issues in time for the July 2021 core update. If your website has been hit hard, it’s worth getting in touch with an SEO Agency who can help you to understand the root of the issue and where you can go from here.